Everything comes from a hobby

Yes, all originated from Mrs. Santi's hobby as the inventor of our Walnut Spiku recipe. At first this Walnut Spiku recipe was a recipe given by the parents of Mrs. Santi, because Mrs. Santi herself had a hobby of making cakes since her childhood, so she was easily curious to do her own experiments on the recipe to find the best composition of the most fitting to her taste. Until finally the Walnut Spiku recipes were created today.

This Walnut Spiku Recipe was originally only use for special events in the family and friends, because at that time Mrs. Santi also a housewife which are very busy to take care of her sons and daughter.

However with the passage of time many friends and family order Mrs. Santi's Walnut Spiku. Which from the beginning it was rejected because of her busyness until she finally began to dare to accept a little order of Walnut Spiku which turned out to be a great welcome from her family and friends. Many of them eventually promoted Mrs. Santi’s Walnut Spiku, so that more and more people who did not know it, contact her to order this Walnut Spiku. In general, they are curious about Walnut Spiku Mrs. Santi because at that time no one has made Spiku with only 1 layer of contents with a sprinkling of Walnuts on top. Seeing this enthusiasm and opportunity, and also with the approval of her family and also her children, then in 1999 resulting in the Santi's Cake as a brand name.

Why use the word "cake" instead of "Spiku" ?

Because at the beginning of this company, Mrs. Santi makes a wide variety of cakes, not just Walnut Spiku. Starting from traditional Indonesian snacks, pastries, various types of cakes, roll tarts and various other products. But as time goes by, where more and more orders for Walnut Spiku have been requested, it was decided to focus on just one product, the Walnut Spiku as a typical product from Santi’s Cake. 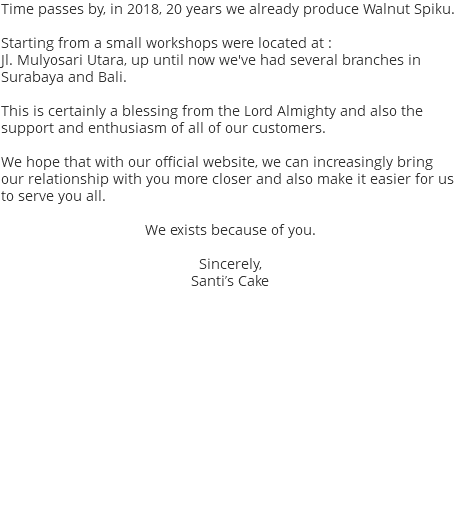